Designing a new version of UNICEF's Augmentative and Alternative Communication app for children with speech impediment.

Researcher & Designer in a group of 10 designers and developers

Our design improved the experience of current users drastically, with a 100% positive feedback. It also increased user retention by 30%.

The augmentative and alternative communication (AAC) app, CBoard, is used primarily by children, but edited and customized by parents and guardians. The original app that UNICEF came back with negative reviews - we were given the list of feedback from the current users and were able to pinpoint the more obvious problems of the app - the app was said to be difficult to customize and edit to suit the primary users needs. Therefore, we needed to create an app for the guardians to be able to quickly customize the AAC device to instantly suit the needs of the child using the app.

One example of difficult usability: This is the edit mode of the original app. However, despite being on edit mode, there is also a "build" mode, where more edit options are hidden. 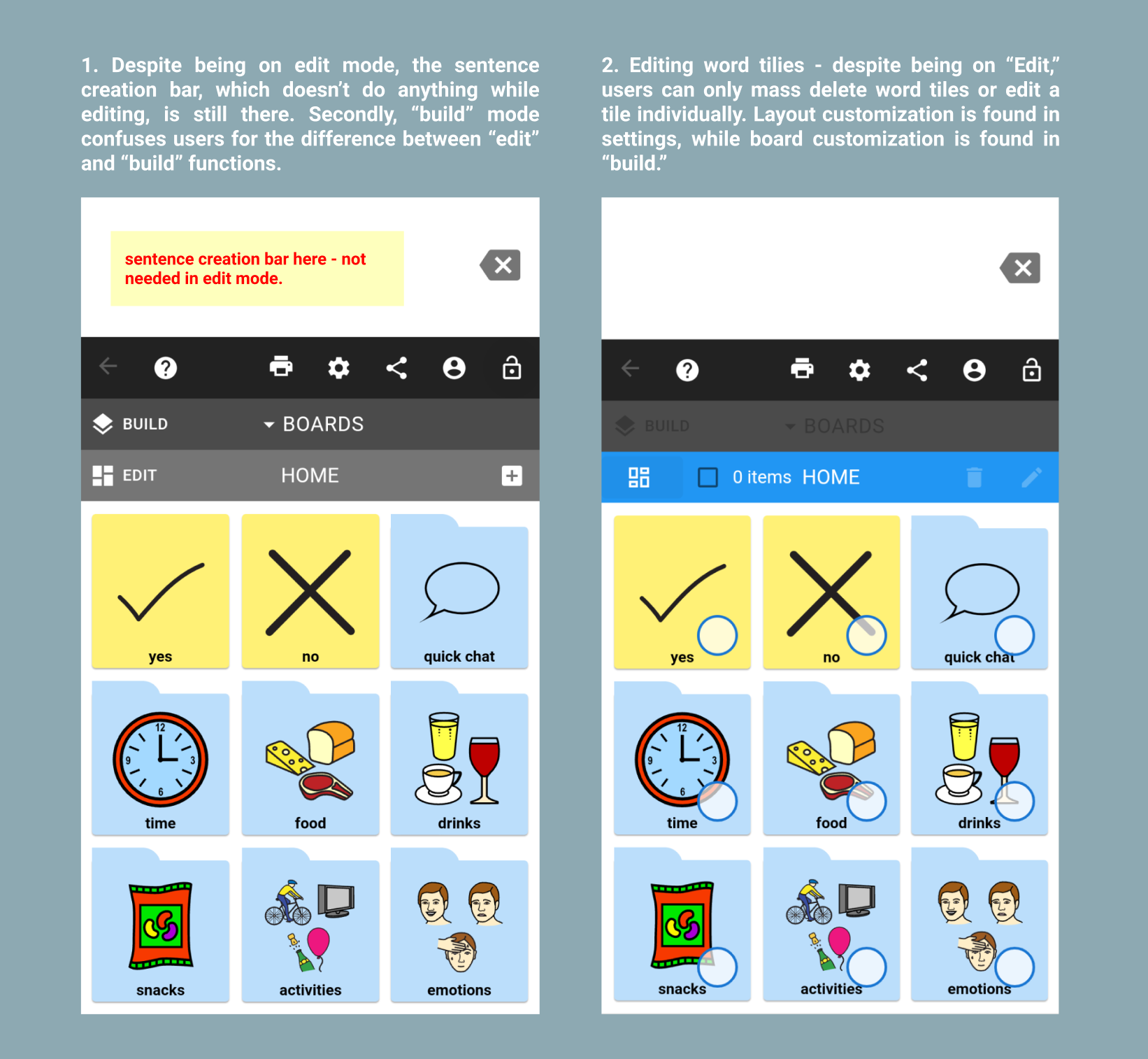 We approached desk research by first doing some competitive landscape analysis. Two of the competitors we looked at were Let Me Talk and Dynavox. We looked at the features they were known for, and took note of what they both had that CBoard lacked. What was in the center of the venn diagram would be the main factors we need to consider during our design.

I wanted to do some user observations in classrooms or households where AAC devices were commonly used. However, due to the pandemic, we had to make do with surveys and virtual interviews to gain insight on what users wanted to see in AAC devices. 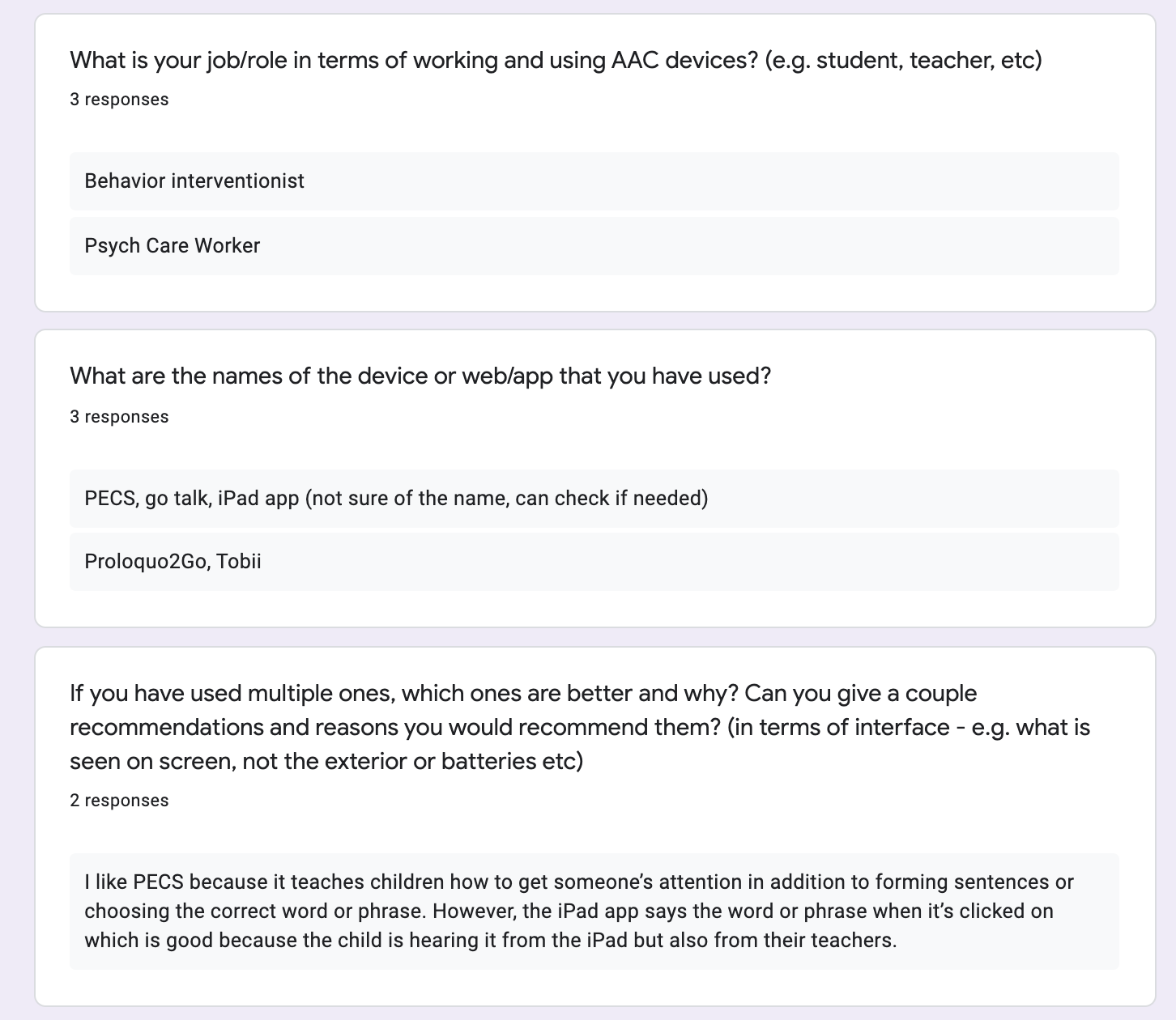 I was able to find two people to interview. What I wanted to find out during the interviews were:

• How guardians used AAC devices for their children

• Must-haves in an AAC device

• What they wiished AAC apps would implement

• Let them look at the current CBoard edit mode and see if they are able to customize a board. And to get their thoughts after.

I consolidated all the notes into summaries on sticky notes next to the screens they talked about. This way it was easier to present my findings to my team.

Some screenshots of feedback from users regarding CBoard's customization and edit mode into sticky notes. 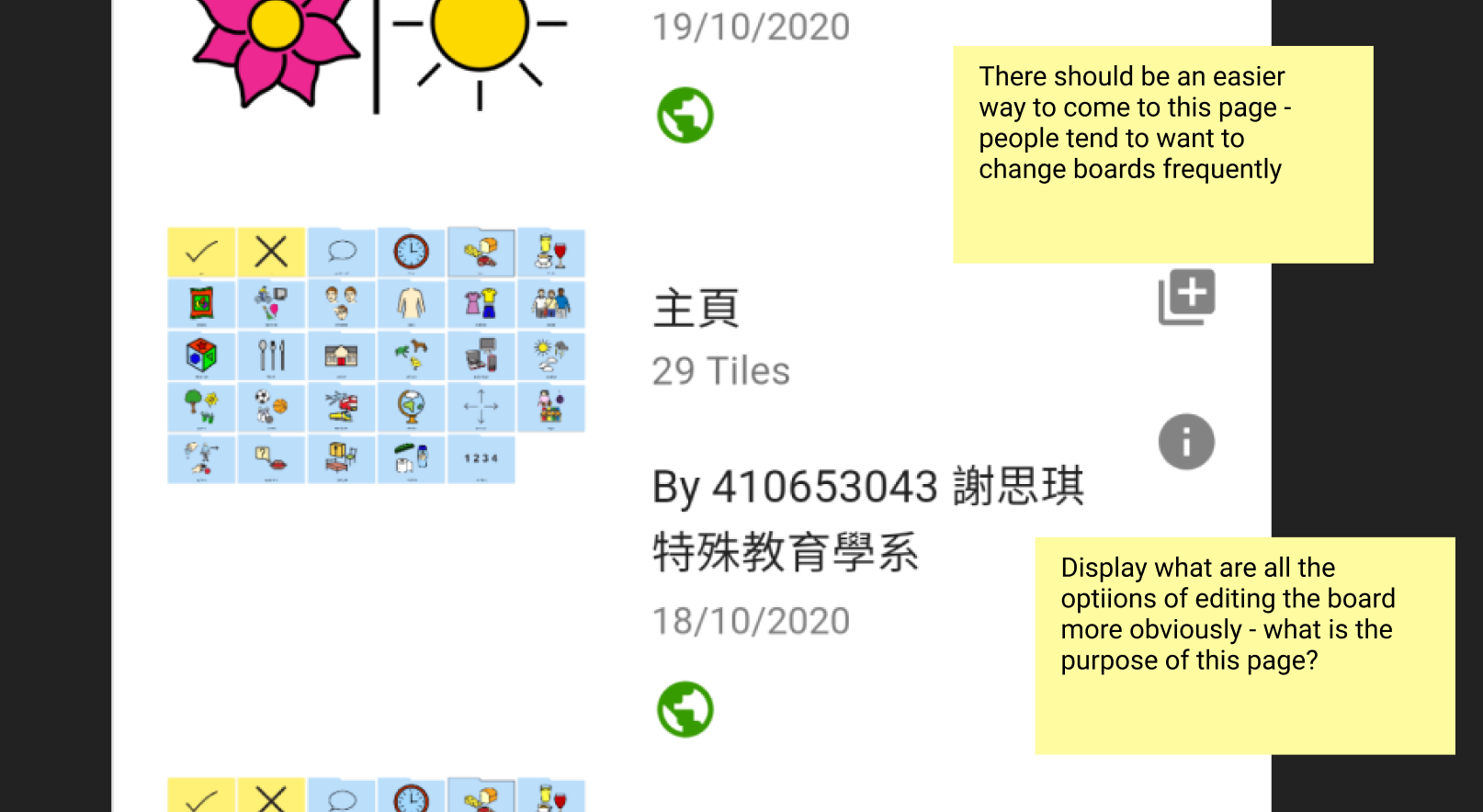 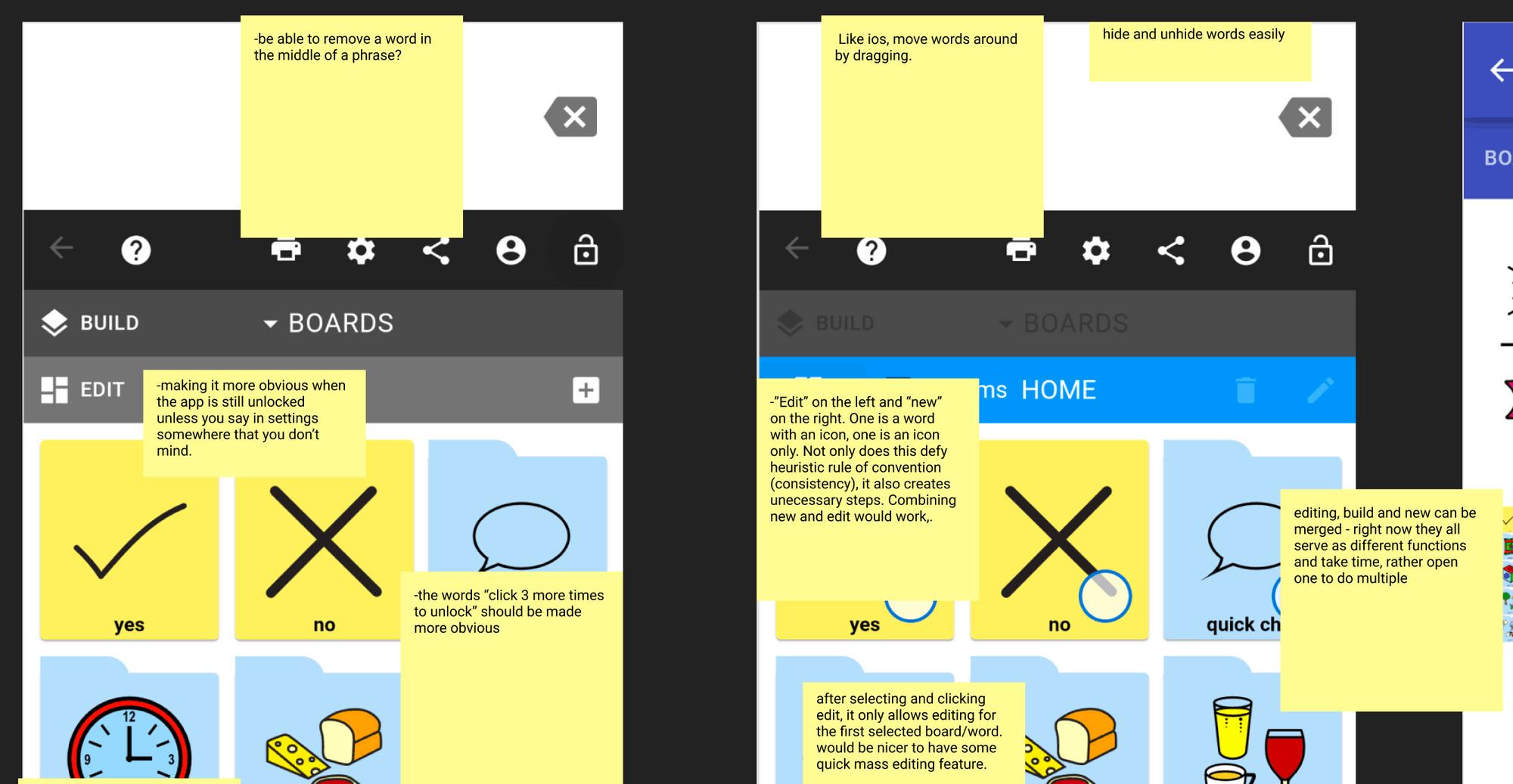 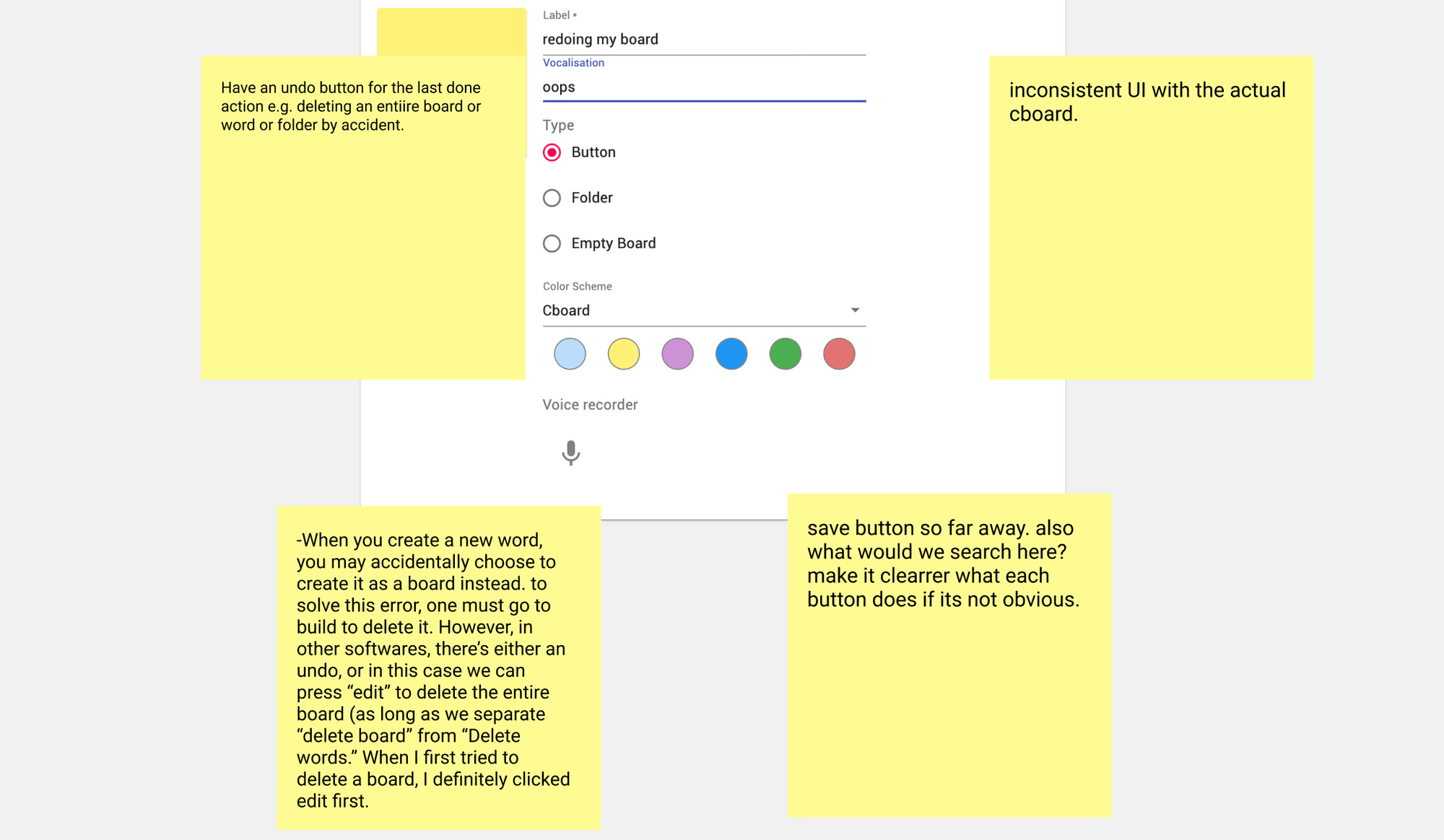 Here are some important changes we made to the original app for our wireframes/lofi design:

1. Word tiles can be hidden and locked - hiding tiles saves time compared to deleting then needing to remake it again. Locking word tiles can help smoother customization during edit mode.

2. Sentence can be revised if a mistake is made without needing to restart

3. The app's interface changes design so parents/teachers will know whether the app is locked or unlocked.

I designed the new edit mode and decided on the interface colors and symbol placements when the app is locked/unlocked.

Some of our lofi screens with descriptions above for our developers to understand what each screen does. The last screen shot is our system map with our mid-fi to show our developers how screens flow 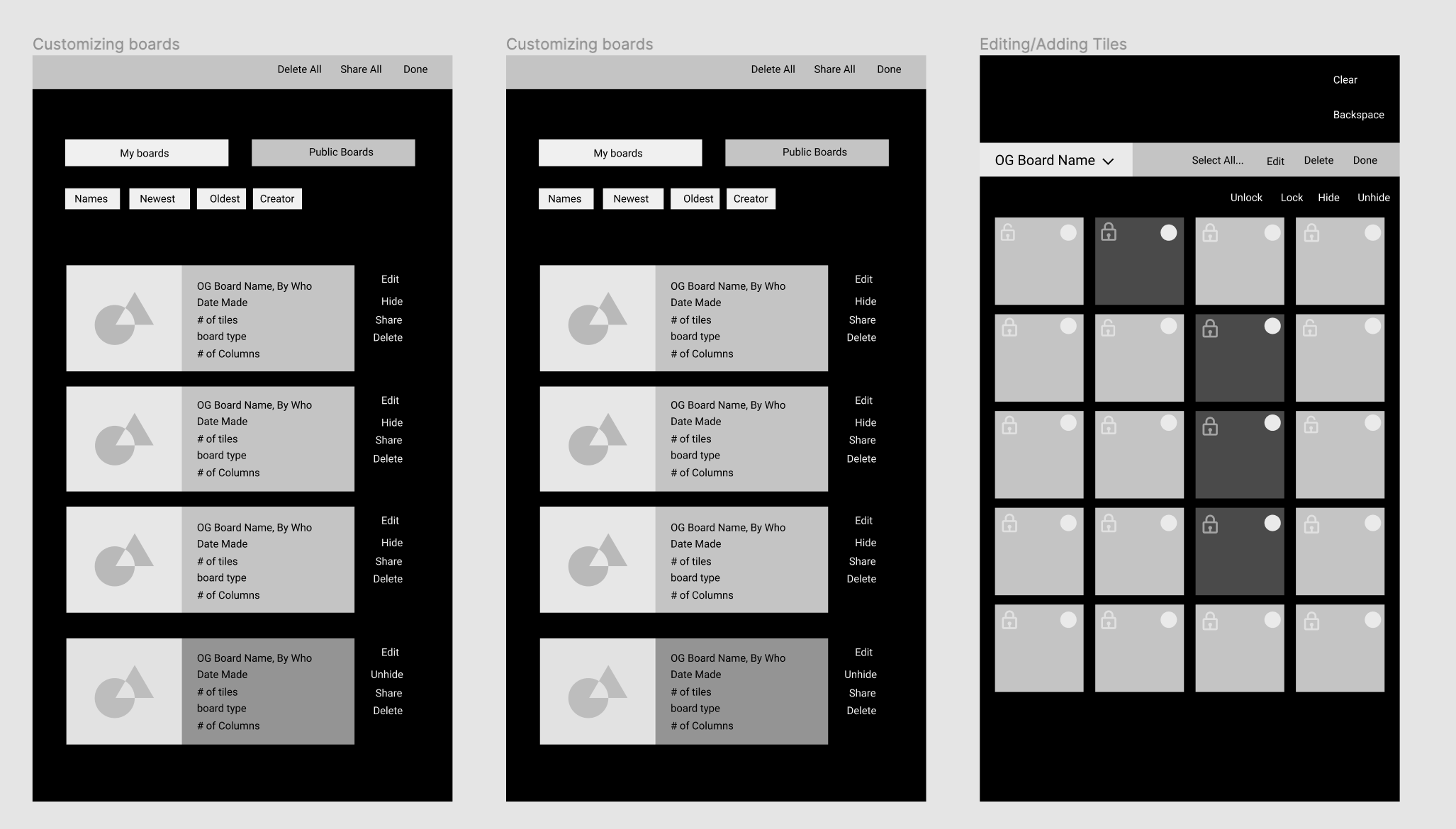 I interviewed the same two people from my previous interviews for feedback on what they thought of the new features. The feedback from user interviews were positive - As they walked through each screen, they were able to figure out what is new and were happy with the new changes. They enjoyed the easier flow to create sentences, change settings and customize word tiles and boards in edit mode. For our hifi, we knew to focus on eliminating sentence creation header in edit mode and to provide a stronger lock system.

I'm proud of how my team and I were able to communicate with our non-design client to explain the necessities of our design choices. We were able to come up with an app that had successful, positive feedback despite not being able to conduct  in-person user testings due to Covid. Something I think I would do differently next time is to do user research and test our hi-fi more by observing the interaction between children with speech impediment disabilities and parents when using this app. This way we would know exactly what the problems we need to fix or include is. Finally, this project definitely taught me how to communicate with developers and project managers. Handling work given and being able to present out work and prove to non-designers why certain choices had to be made is an important skill to have!