Researcher & Designer by myself

Despite Zoom's overwhelming popularity thanks to the lock down, I have heard numerous comments from its users about its confusing usability. I had to create a better experience for users to communicate and organize meeting information, such as files, agenda, and communication.

I first researched Zoom's biggest competitor - Google Hangouts. I wanted to see what made GH a great choice for people to do conference calls on. Unlike Zoom, Google Hangouts allows users to keep all call data in a permanent chat, as well as call information in a history log. Furthermore, Google Hangouts pays more attention towards their chat function.

Google Hangouts keeps all chats. Users can call each other directly through the chat. 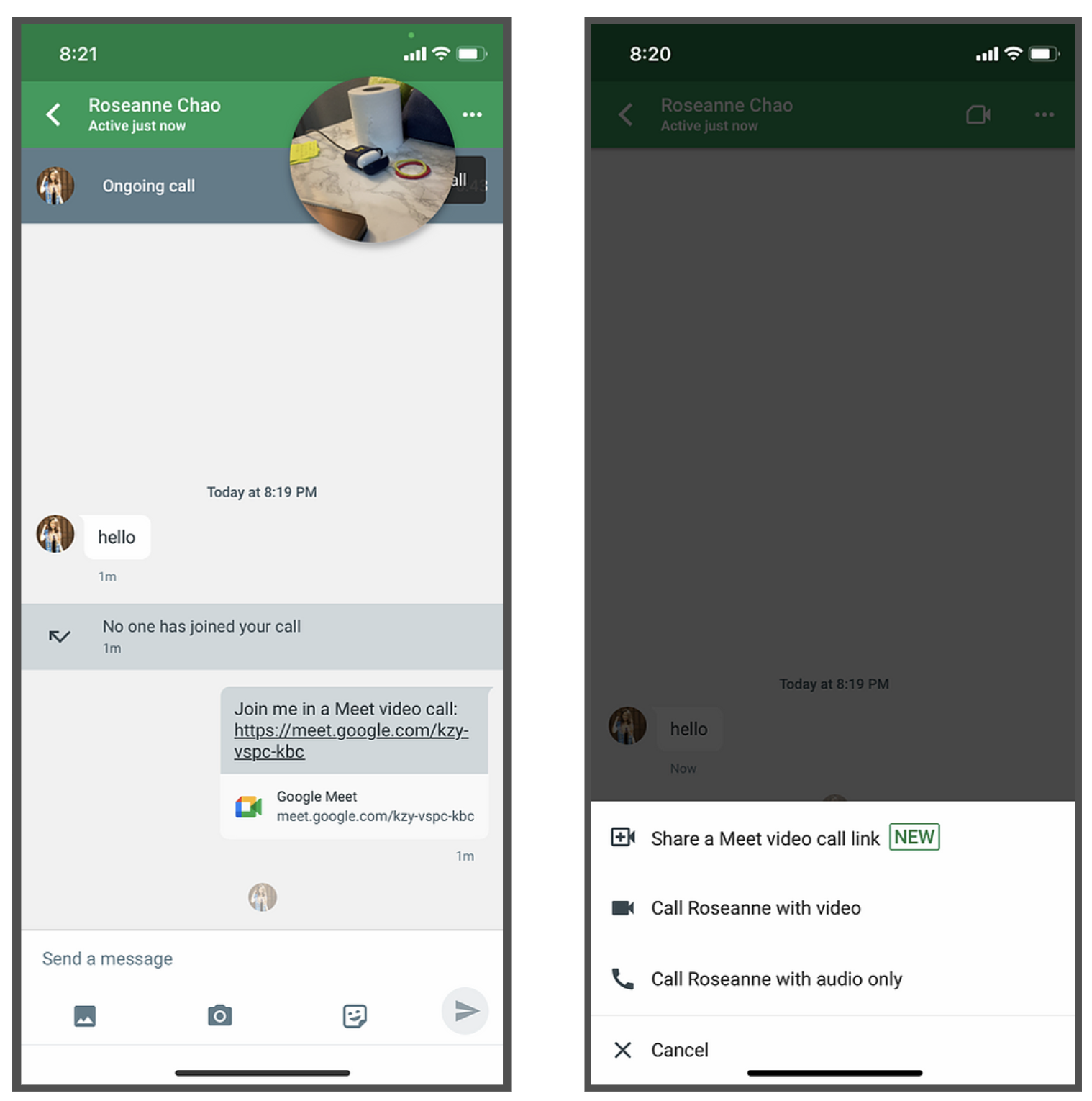 For initial research, I had participating users join one zoom meeting and perform the given tasks:

Task 1: Share and talk about a photo on their phone.

Task 3: Send and save files

Task 4: Ranking different fruit, colors, and fast food chains in order of best to worst (this task was so participants had something to collaborate and talk about)

Participants seemed to be comfortable using most zoom features. However, chats became messy when people tried to private message each other - there were comments after the task where people said that they were easily confused/had to catch themselves from making mistakes to switch to another person to talk to.

The overall consensus was that the structure was extremely messy to navigate, and people were unable to look back on chat/files that were sent after the meetings.

1. the blue icon making a mistake and messaging everyone instead of one person. 2. Zoom's call "history" vs. Google Hangouts. 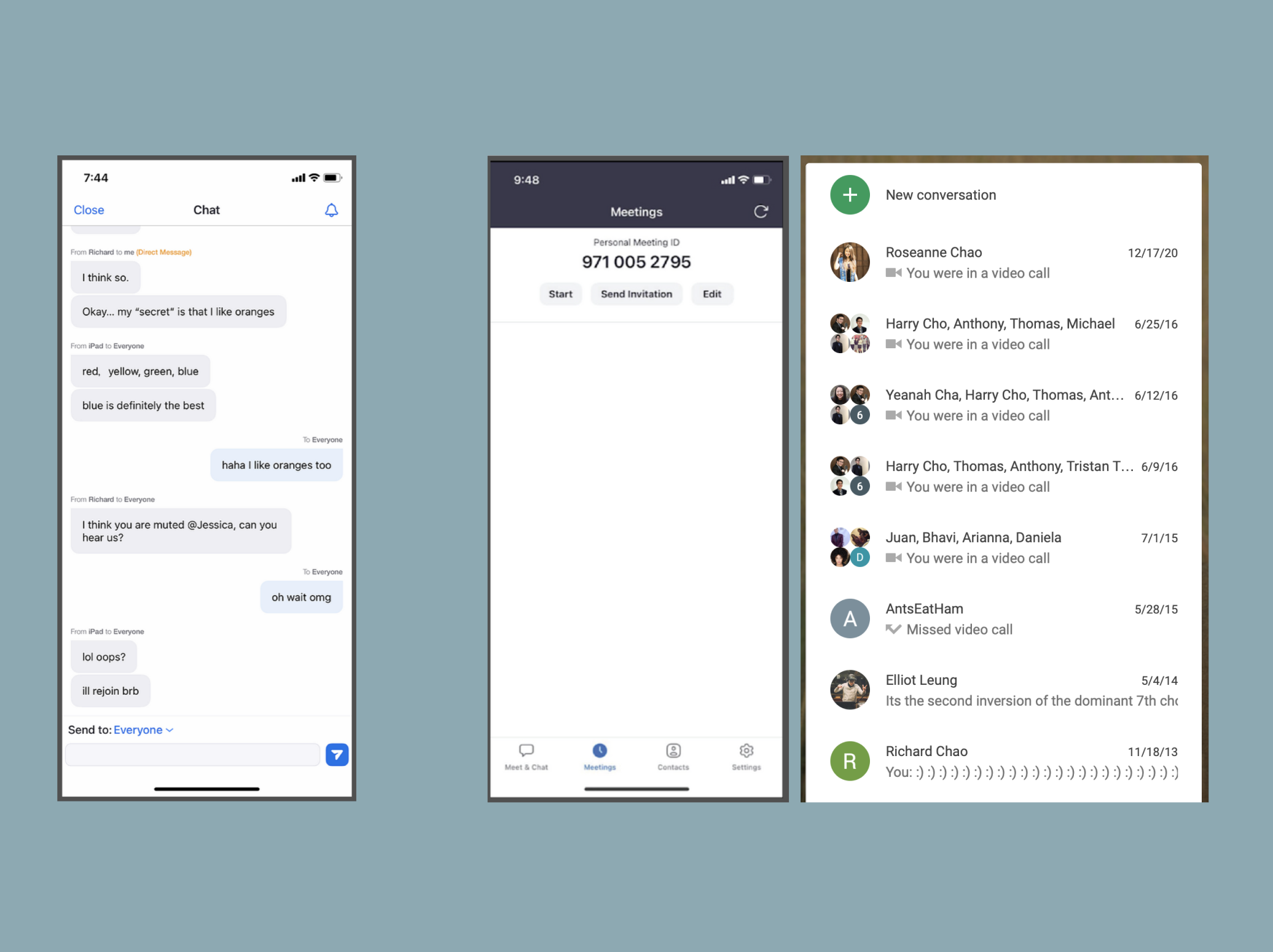 I created a storyboard based on stories users told/problems they faced when they would use Zoom's mobile app.

From the Scenario, I came up with sketches and lofi prototypes to test on users. 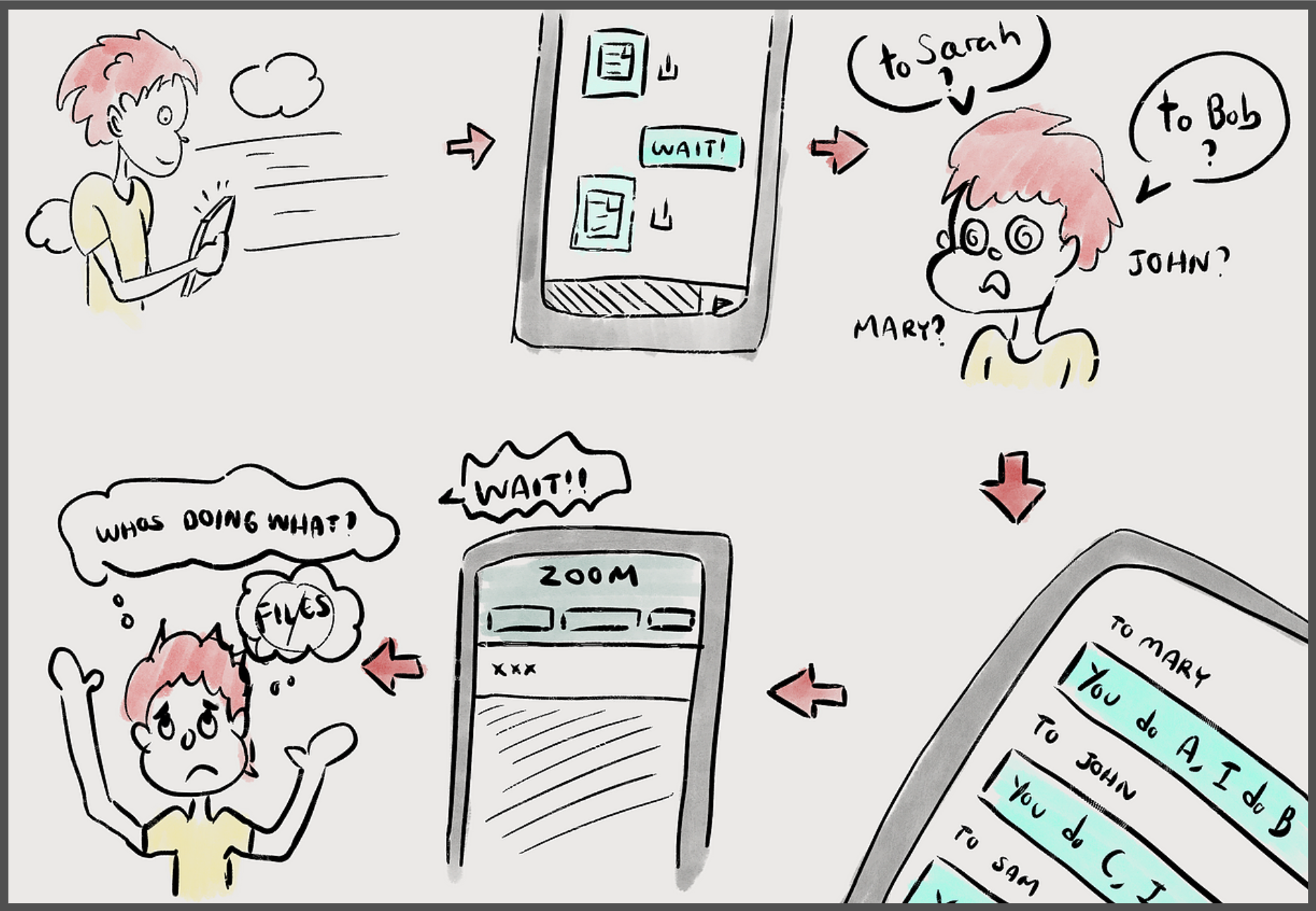 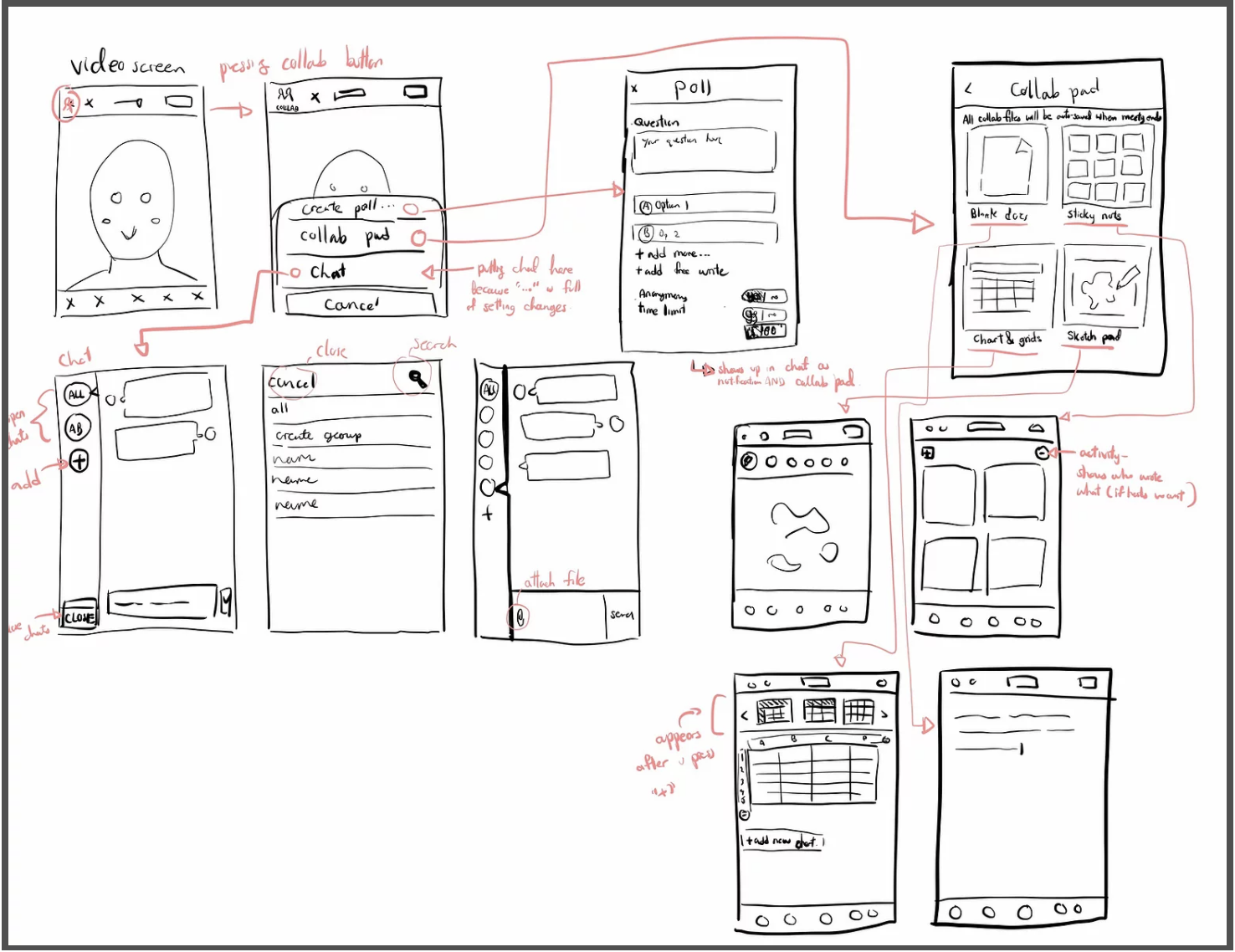 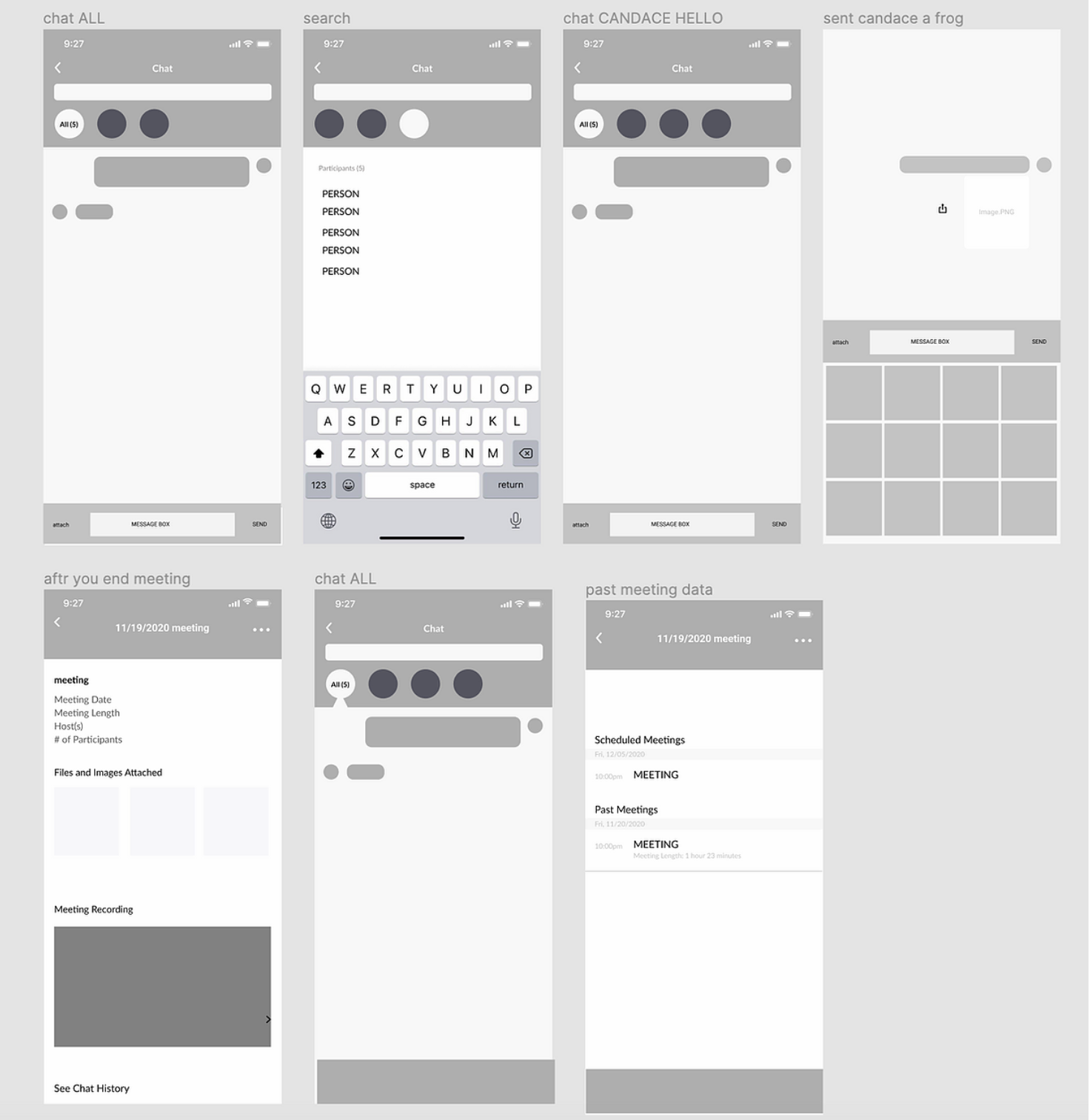 I tested my new flows on people of different ages. I received positive feedback, where people were happy that the chat was much clearer, and that meeting information can now be found even after the call ends. However, my older participant, who was 50, didn't understand how to switch between chats, because he wasn't an avid social media user, so he was unfamiliar with chat applications. This made me realize that I still had to include labels for certain buttons so people of all ages would understand how to use different app features.

I think I did a decent job discovering the main features that users have trouble with on Zoom. However, I don't think I fully explored enough possibilities to fix the issue. I would love to explore the desktop platform if I could, and also interview people who work at Zoom to figure out why  Zoom's mobile app had certain limitations that the computer app didn't.